Designed to give you deeper insights into an individual’s immune response to any infection, including the SARS-CoV-2 virus.

General information about the biomarker HMGB1

Over the years, HMGB1 has increasingly attracted the attention of basic as well as clinical researchers, and has become one of the most intriguing molecules within the complete arsenal of proteins of the innate immune system.

HMGB1 is a nuclear protein that can bind and bend DNA, but it can also be released to the extracellular environment, where it exerts additional functions. Once released into the cytoplasm by immunocompetent cells, HMGB1 is involved in disease pathogenesis and inflammation (damage-associated molecular pattern, DAMP). HMGB1 is also associated with numerous pathologies,¹ including

Being a severe acute respiratory syndrome disease, COVID-19 might cause significant damage to the lungs and, if involved with comorbidities, lead to death. Openly-published statistics indicate that, despite being on ventilation, approximately 85 % of these patients still die. A recent review shows how HMGB1 might indicate the severity of SARS-CoV-2 associated inflammation in the lungs.²

Read more about the role of HMGB1 in the immune response to COVID-19:

Benefits and specifications of the HMGB1 Express ELISA kit include

Get a detailed summary of the functions of HMGB1 with our dedicated “HMGB1 poster” or browse our product flyers to gain insights into researching HMGB1. 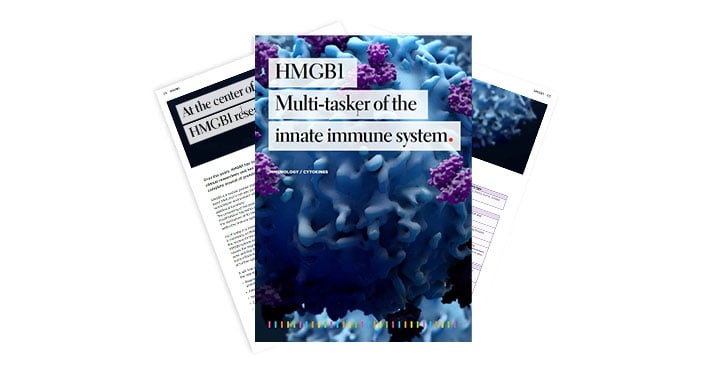 * The combined use of assay, process script and instrument must be validated individually on site by each laboratory.

** HMGB1 express ELISA may not be available in your area. Please contact your local Tecan representative.

GET YOUR FREE COPY NOW