Studying the co-operative and competitive behavior between bacteria offers potential insights into treating polymicrobial infections. Researchers at the University of Zurich are using a combination of biochemical and gene expression assays to probe these community interactions, hoping to better understand how microbial species evolve, co-exist and cause disease.

The Department of Plant and Microbial Biology at the University of Zurich, Switzerland, brings together plant biologists, molecular biologists and microbiologists to explore a diverse range of fields, from lake ecology to plant-microbe interactions and pathogenicity. The 180-strong department is home to Professor Rolf Kümmerli and his research group, which focuses on microbial evolutionary ecology. He explained: “My background is in evolutionary biology and, following a PhD studying social interactions among insects, I decided to apply the concepts I had learned to microbes. One of the key benefits of working with microbes is that we can observe their evolution in real time, using molecular tools to study how they evolve, behave and interact with each other.”

“Our primary focus is understanding the co-operation and competition between microbes. For example, bacteria voluntarily secrete compounds to create a shared pool of metabolites, which we call ‘public goods’. The entire group benefits, because co-operation accelerates the uptake of nutrients for everyone in the community. These contributions are not always equal though, and some microbes – the ‘cheats’ – do not add anything to the public goods pool, taking advantage of the system. There is also the potential for competition or ‘in-fighting’, with bacteria secreting various toxins to give themselves an advantage. Many of these shared metabolites and toxins are responsible for the symptoms we experience during an infection, and are known as virulence factors. From an ecological perspective, it’s fascinating, we’re interested in how these co-operative and competitive interactions add up to explain how species co-exist and cause disease.” 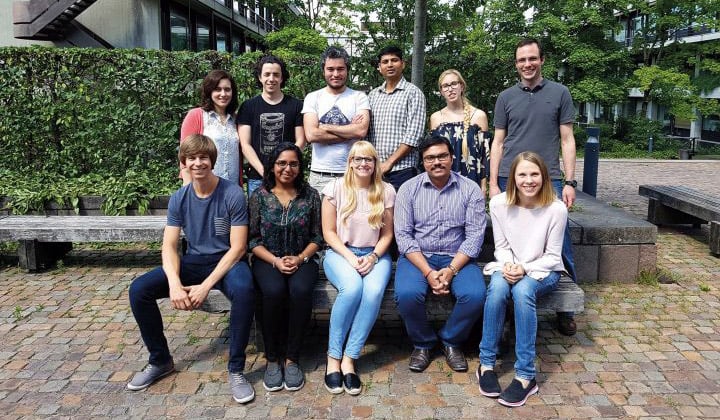 The Department of Plant and Microbial Biology at the University of Zurich, led by Professor Rolf Kümmerli (back row, far right)

“We have a number of projects studying these interactions both within and outside hosts. These polymicrobial infections are important to investigate, as it’s still unclear what happens when microbes interact with one another, and the underlying reasons for an increase in infection severity. Ultimately, we want to know if we can steer these microbial population dynamics to reduce damage to the host. This has led us on to screening compounds to see whether they inhibit communication systems between bacteria, which control the expression of public goods and toxins. One particular trait worth exploring concerns iron-scavenging siderophores. Typically, bacteria cannot grow in our bodies because iron is not readily available. However, some bacteria secrete siderophores that extract iron from host cells. In vitro experiments – as well as some in host systems – show that we can use specific compounds to disable the function or expression of these siderophores, potentially preventing bacterial growth.”

"We now have an entire strain library we can rapidly screen in this way to see how bacteria react to treatment, which generates a lot of kinetic data for analysis."

“We have two plate readers – an Infinite® M200 PRO and an Infinite M Nano+ – which are key to carrying out our screening assays. I used a Tecan reader at my previous workplace – where we had multiple platforms from a number of suppliers – and it was clear to me that the Infinite 200 was the most appropriate for this research. We bought our first system in 2013, and it has been ideal for these high throughput assays. It was soon running 24/7, with some users having to wait a long time to run their experiments, so we purchased the second system at the beginning of this year to cope with the volume of assays we wanted to perform.” “Our simplest assays use the readers to measure optical density, helping us to monitor the growth of bacteria treated with compounds inhibiting bacterial communication. Conveniently, siderophores exhibit autofluorescence, so we can easily measure production of these virulence factors with the systems’ monochromators. In addition, we have constructed modified strains, tagging the genes of interest with green or red fluorescent proteins to allow us to quantitatively track the expression of virulence genes over time. We now have an entire strain library we can rapidly screen in this way to see how bacteria react to treatment, which generates a lot of kinetic data for analysis. This type of assay is on a totally different level!”

“The support from Tecan has been very good. If we have any questions, we just call the Tecan team, and they either explain things over the phone or – because we’re right on their doorstep – they send an application specialist to help us out; we’re very lucky. This kind of support is important in an academic setting, as people come and go in the lab, meaning that there is a risk of losing some technical expertise with the equipment over time.”

“In the future, we would like to develop assays for polymicrobial infections to monitor multiple competing strains – each with a distinctive signal – allowing us to track community composition in real time. One of the key challenges is that many of these bacteria secrete multiple autofluorescent metabolites into the media, which interferes with detection of the genetic markers, but this is a technical issue that we hope to solve. Ultimately, our long-term goal is to see our research adopted for clinical applications,” Rolf concluded.