Detection at the molecular level

Many common food additives and pharmaceuticals make their way directly into aquatic ecosystems. While their effects on humans are well documented, the impact on the environment and marine lifeforms is largely unknown. This has become the focus of a collaborative project involving researchers at the Karlsruhe Institute of Technology, which has adopted fluorescence polarization to explore the problem at the molecular level, screening compounds for their affinity to nuclear receptors. 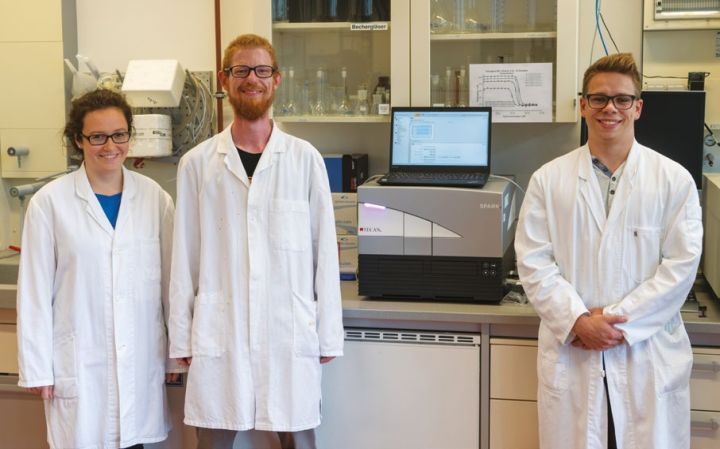 The Karlsruhe Institute of Technology (KIT) in Germany was established in October 2009 following the merger of the Karlsruhe Research Center and the University of Karlsruhe, with the purpose of developing sustainable solutions to tackle today’s societal, industrial and environmental challenges. KIT’s Institute for Functional Interfaces (IFG) studies solid matter surface interactions on a nanoscale and their applications for macro-level systems. Siegfried Hohmann, a PhD student in the analytical biochemistry group at IFG, said: “My research forms part of Effect Net, a multidisciplinary project on behalf of the Baden Württemberg Water Network, which brings together around 20 researchers from across the University of Heidelberg, the University of Tübingen, KIT and biotechnology company Biametrics. The collaboration is investigating the effects of food additives and pharmaceuticals – including their metabolites and decomposition products – on aquatic ecosystems, as well as raising social awareness of the problems these micropollutants can cause, in collaboration with consultancy firm ÖKOnsult.”

Siegfried continued: “The aim of the project is to analyze the impact of these chemicals, from the molecular receptor level – which I am researching – through to the microbiome and behaviors of fish and snails. My particular focus is on four main compounds: the artificial sweetener sucralose, the anti-diabetic medicine metformin and two antidepressant drugs, fluoxetine and citalopram. These substances are poorly digested by humans, so large amounts end up in wastewater plants. Unfortunately, they are not effectively removed at this stage – further cleaning and filtration would be required – and enter the environment as a result.”

"The platform can also read 384-well plates… which allows us to include our reference substance and three other unknowns in a single run, using 16 different concentrations in triplicate."

“The nuclear receptor affinity of these different substances, their metabolites and any products arising from UV decomposition can be determined against reference standards with known affinity. A key technique for determining this affinity is fluorescence polarization (FP). The principle of the technique is fairly straightforward. A sample is mixed with a receptor bound to a fluorophore-labeled analog of the compound of interest. If a compound present in the sample has a higher affinity than the labeled analog, it will displace it and preferentially bind to the receptor. Polarized light is then used to excite the fluorophore, and the difference in polarization between the exciting and emitted light is measured. The key variable is the speed of rotation of the labeled analog; when bound to the receptor, rotation is slow, but after displacement, rotation is much faster. The difference in polarization between excitation and emission is therefore an indicator of the level of displacement – as more labeled analog is displaced, the emitted light becomes less polarized.”

“We decided to use FP for fast screening of samples, to identify compounds for more in-depth study by surface plasmon resonance spectroscopy (SPR). We needed a platform that could offer quick reads and, after looking at other instruments on the market, we decided to purchase a Spark® multimode microplate reader with enhanced Fusion Optics. The system’s software is easy to use, and my experience trying to set up the experiments on an older instrument meant I was already familiar with the way microplate readers work and which parameters could be optimized. The platform can also read 384-well plates – a deciding factor – which allows us to include our reference substance and three other unknowns in a single run, using 16 different concentrations in triplicate. The readings can be taken in 10 to 15 minutes – just enough to grab a bite to eat – in contrast to SPR, which can take almost a day to give a single measurement, and is better suited to in-depth studies to determine kinetics and time-resolved measurements for compounds identified through FP screening.”

“We purchased the Spark at the beginning of the year, and initially validated an assay involving estrogen receptors, which are inexpensive and easy to stabilize. The assay uses testosterone, which has a low affinity for the estrogen receptor, and zearalenone, which is an estrogenic metabolite that shows a strong affinity. Results for varying testosterone and zearalenone concentrations were used to create a competitive plot, showing the relationship between concentration and the polarization of the emitted light. The half maximal polarization shift concentration (IC50) is characteristic of each substance and its affinity, and can be referenced against an estradiol standard. As expected, testosterone showed no change in polarization as the concentration varied, while there was a clear decrease in polarization as the concentration of zearalenone increased. Overall, the technique has worked really well, and I’m looking forward to adapting the method to support my research into micropollutants,” Siegfried concluded.

To find out more about Tecan’s Spark reader, visit www.tecan.com/spark
To learn more about the Institute for Functional Interfaces, go to www.ifg.kit.edu