Researchers at the Grenoble Institute of Technology are exploring the potential of biomimetic coatings to aid tissue regeneration. The group has developed an innovative, automated layer-by-layer production technique, allowing high throughput in vitro investigations into the ability of these biomimetic coatings to control stem cell differentiation.

Biomimetic coatings have gained popularity in recent years as a promising tool for biomedical cell culture applications, thanks to the wide range of available ‘building blocks’ and their potential for the localized delivery of bioactive molecules. Professor Catherine Picart and her group in the Materials and Physical Engineering Laboratory (Laboratoire des Matériaux et du Génie Physique, LMGP) – part of the Grenoble Institute of Technology, France – are investigating this technology for the regeneration of bone tissue, looking specifically at difficult clinical situations where bone does not regenerate as it should. She explained: “Most of the time, a patient has the ability to self-generate their bones, or surgeons can find solutions. However, some injuries or conditions require a more innovative strategy. We have developed an osteoinductive coating that actively promotes the regeneration of bone, aiding the healing process, and we are now using this to understand the molecular mechanisms behind the differentiation of stem cells into bone and related tissues, such as fat and cartilage.”

The use of layer-by-layer (LbL) assembly techniques is becoming increasingly common for the production of these biomimetic surfaces for in vitro investigations, but the generation of surfaces involving costly and rare biomolecules remains problematic. Catherine explained: “LbL films are nanometer thin – they cannot be seen by eye – so they are extremely fragile. They need to be produced in a consistent and homogeneous manner to promote consistent and controlled cell growth, which is very difficult to achieve manually, especially as some LbL films have up to 24 layers.” 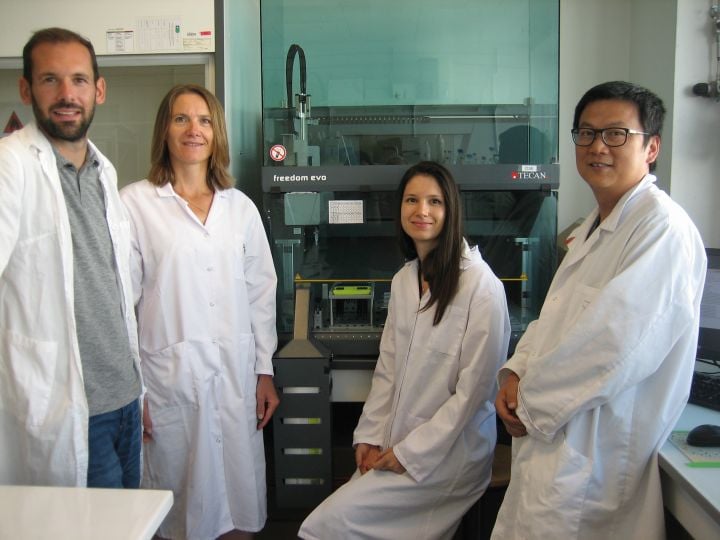 Current techniques require milliliters rather than microliters of soluble biomolecules, and are poorly adapted to microplate-based applications. In addition, manual LbL coating of microplates is both labor intensive and user dependent, making it poorly suited to high throughput screening strategies. To overcome these issues, the LMGP team decided to automate the LbL assembly process, harnessing the power of a Freedom EVO® 100 liquid handling workstation.1 Catherine continued: “Tecan’s Freedom EVO platform is well known in the biotech and pharmaceutical industries, and has been used for many studies involving high throughput screening of cellular behaviors. The challenge for us was to develop a liquid handling protocol that would allow reliable, reproducible and economical production of LbL films – something that had never previously been achieved in a microplate format.”

The exceptional control of liquid handling offered by the Freedom EVOware® software – combined with the workstation’s ability to tilt the microplates during dispensing and aspiration – is at the heart of the coating protocol. “Each layer is deposited by a simple physical adsorption process, but the film is extremely thin and delicate, so it is essential not to disturb the previously adsorbed layers. Once each layer has been deposited, excess material needs to be aspirated out of the well, followed by a wash step, before the next layer can be added. Calculating the exact volume that needs to be aspirated after adsorption is critical to ensuring homogeneity of each layer, as excess material will form a meniscus around the edge of the well. The microplate is tilted during aspiration to minimize the dead volume in each well, and the ability to precisely control the position of the pipetting head is vital to avoid damaging the film. These complex liquid handling operations are managed by Freedom EVOware, and we have supplemented the software with a macro specifically developed for this novel application – a task that was far from trivial.”

"The tools we have developed could be of great value to cell biologists across the spectrum."

The optimal tilting angle and aspiration volumes were determined with a series of experiments across a large number of microplate wells, using fluorescentlylabeled films to provide a quantitative assessment of the film homogeneity at the bottom of each well. This not only demonstrated the exceptional reproducibility of the technique – achieving CVs of less than 7 % – it also highlighted their suitability for high resolution imaging, with good optical transparency and a thickness of less than 10 micrometers. “Cells grown on biomimetic films can form cellular assemblies or aggregates, but they are not embedded within the matrix. This makes it very easy to automate spectroscopic and microscopic analysis, particularly using Tecan’s integrated multimode readers, and allows us to perform quantitative analysis of a wide range of assay types very quickly. Although our team is currently focused on bone regeneration, this methodology would be just as useful for investigation of vascular systems, fat regulation and neurological diseases, where the presence of bioactive molecules are equally important for physiological functions. The tools we have developed could be of great value to cell biologists across the spectrum, and making these available to other scientists would be a dream come true,” Catherine concluded.

To find out more about Tecan’s cell biology solutions, visit www.tecan.com/cellbiology
To learn more about LMGP’s research, go to www.lmgp.grenoble-inp.fr