Finding a clinical future for HMGB1?

Extracellular HMGB1 has been implicated in a wide range of conditions, from trauma and sepsis to epilepsy and lupus. As a result, this almost ubiquitous biomolecule is garnering increasing interest as a potential target for new therapeutics. In a recent review paper, Prof Ulf Andersson et al. summarized the latest advances in our understanding of the release, receptor interactions and functional consequences of extracellular HMGB1.

High-mobility group box 1 (HMGB1) is one of the most common nuclear proteins in the body, with around one million copies per cell. However, it is the extracellular release of HMGB1 that is generating significant interest in the life sciences and biomedical sectors. Considered the prototype damageassociated molecular pattern (DAMP) molecule, extracellular release of HMGB1 is a molecular ‘alarm’ signal that triggers inflammation and tissue repair. Ulf Andersson, a senior professor at the Karolinska Institute, has spent over 20 years investigating the inflammatory effects of HMGB1. He explained why the molecule has been implicated in so many diseases: “If you search the literature, there are at least 14 cellular receptors that have been identified as potential HMGB1 receptors, but only two – TLR4 (Toll-like receptor 4) and RAGE (receptor for advanced glycation endproducts) – are well documented. This widespread implication of HMGB1 in various cellular pathways may be due to its role as a transporter protein, binding to other immune-activating molecules and facilitating their uptake into cells via the lysosomal compartment.” 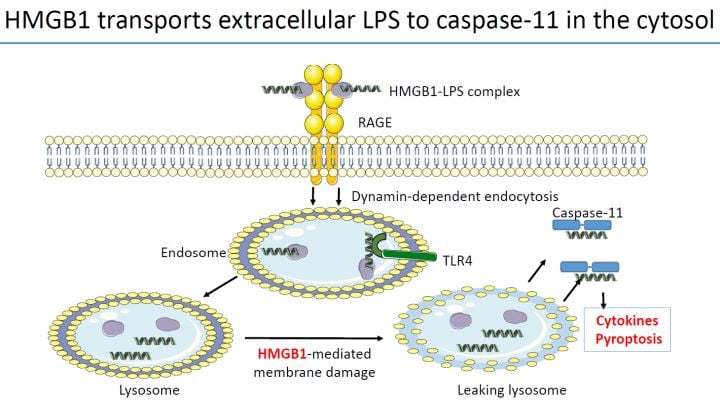 “One of the key features that complicates our understanding of extracellular HMGB1 activity is its ability to permeabilize the membrane of the lysosome. Under normal circumstances, molecules taken up via the lysosomal compartment are digested to avoid disrupting cellular activity. However, in the acidic environment of the lysosome, HMGB1 causes the lysosomal membrane to ‘leak’, allowing intact biomolecules to be released into the cytosol. Depending on the nature of the co-transported molecule, this can have a range of intracellular effects, creating a highly complex picture of HMGB1 activity. For example, in systemic lupus erythematosus, HMGB1 transports dsDNA from dead cells into the cytosol, inducing type I interferon release. Another class of molecules co-transported into cells via this route is lipopolysaccharides/endotoxins (LPS). Found in the outer membrane of Gram-negative bacteria, HMGB1 binds and transports LPS into endothelial and myeloid cells via the RAGE pathway. Once released into the cytosol, LPS can lead to the life-threatening systemic inflammation that occurs in Gramnegative sepsis.”

“HMGB1 antagonists have already been highly successful in a number of preclinical inflammatory disease models, making it a promising therapeutic target for both infectious and sterile inflammation. The next step is to translate these findings to a clinical setting, and several promising humanized anti-HMGB1 monoclonal antibodies are already under development. Ultimately, HMGB1 antagonists could hold the key to the treatment of conditions such as sepsis or arthritis, but there are a large number of other conditions that could also be targeted. As a proof of concept, focusing on a disease with a distinct and easily measurable outcome – such as post-sepsis anemia or acetaminopheninduced liver injury – may provide a better starting point. This will allow clear, quantifiable assessment of the potential benefits of reducing extracellular HMGB1 levels in a less time-critical and clinically complex setting.”

"The commercial availability of the IBL HMGB1 ELISA, which is now being used in research applications globally, is transforming the way these studies can be performed, allowing accurate assessment of pre- and post-treatment extracellular concentrations."

“Regardless of the indication, the ability to accurately measure HMGB1 will be vital. Previous studies have been hampered by the lack of a standardized and reproducible assay, instead relying on tests developed in house by a few research laboratories with a special interest in this field. This not only delays analysis of samples, which often need to be shipped around the world, but it also precludes the comparison of data from different sites and studies. The commercial availability of the IBL HMGB1 ELISA, which is now being used in research applications globally, is transforming the way these studies can be performed, allowing accurate assessment of pre- and post-treatment extracellular concentrations. This has generated some very exciting results at the preclinical level and, as HMGB1 is so well evolutionarily conserved – it is over 99 % identical in all mammals – we have a real hope that these therapies will be successfully translated into a clinical setting in the not too distant future,” Ulf concluded.