A flexible lab for the future

Automated laboratory workflows are commonplace in the pharmaceutical sector, offering increased throughput and process security throughout the drug discovery process. Most of these systems are dedicated to a specific task or assay, and have been optimized to streamline these repetitive tasks. Roche has taken a different approach for drug metabolism work, creating a centralized automation facility that is agile enough to respond to the changing demands of R&D. 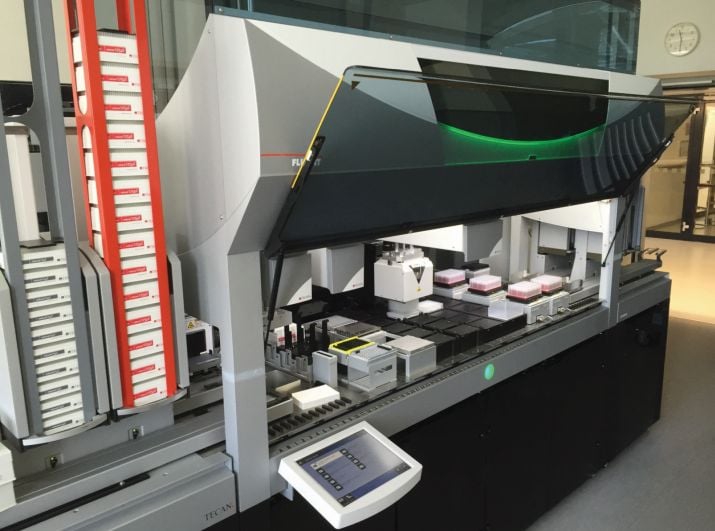 As one of the world’s largest biotech companies, Roche develops diagnostic tests and pharmaceutical drugs, from initial discovery through to clinical trials and commercialization. In 2014, Roche announced a decade-long venture investing three billion Swiss francs in a new Basel research center, with an emphasis on improving sustainability and strengthening communication between research staff. Dr Stephen Fowler, who heads up the automation team within the drug disposition and safety department, said: “Our current way of working has evolved both naturally and intentionally. Right now, in preparation for the new center, the company is asking for our input on how to redesign labs to encourage flexibility and support increased collaboration. We are drawing upon our past experience in former companies and other Roche labs to help us plan for the future. People are spending less time in the lab than before, as automation frees us to focus on the areas where we add most value – analyzing data and designing experiments to answer specific project questions. We continually ask ourselves how we can make the most of our knowledge and expertise. And how our familiarity and proximity to the projects offer something that we cannot buy externally.”

“In the drug disposition and safety department, we work closely with our modeling and clinical colleagues to design in vivo pharmacokinetics studies, predict the potential drug-drug interaction liabilities of a compound, and investigate the enzymes involved in the clearance of our compounds. We work across the entire spectrum of the process; there is no split between discovery and development as there is in many drug metabolism departments, and we are responsible for collating the information for new drug applications to bring to the regulatory authorities.”

“Our automated systems are centralized in a core facility with dedicated technicians to organize and program them, providing a service for all 80 researchers in the department. As most of the assays don’t require a high throughput approach, we have decided to use each instrument for multiple assays. We operate nine Tecan instruments – seven Freedom EVO® and two Fluent® instruments – and the two identical Fluent systems can each run 16 or 17 different assay scripts. Different people from the department use the instruments on a weekly or fortnightly basis, and they can book either system using an electronic calendar when a slot is available; one person can run one assay in the morning, and someone else an entirely different assay in the afternoon. Researchers are responsible for running their assays, but we help the process along by hosting the equipment and supporting them to optimize the automation and gather good quality data. They don’t need to reconfigure the Tecan instruments; they simply load up the experimental protocol, import their variables, add reagents, and set it running.”

"Automation frees us to focus on the areas where we add most value – analyzing data and designing experiments to answer specific project questions."

Stephen continued: “The Tecan devices are well suited to running multiple different assays. We were fortunate enough to work with the Fluent during its development, and we’ve been involved throughout the planning phases of the system. Tecan has developed the software in line with some functionality we desired, and they’re very open to hearing our ideas. For example, we work with lots of different users and every so often an experiment will be set up with a reagent in the wrong place or with a misaligned plate, which disrupts the assay. We inserted a simple step into the software that brought up a screenshot of a correctly prepared assay for comparison, prior to the user pressing ‘Start’. If one in 20 assays now works where it would have failed, it’s a worthwhile intervention. It’s great to see Tecan build on this idea, and you can now import JPEGs, videos and different file formats.”

“The future demands flexibility and the ability to quickly adapt to embrace new opportunities – we can’t simply go out and buy a new instrument for every new assay that we need to run. If one of our assays is no longer needed, there is always another awaiting automation. We’ve been able to demonstrate that the systems can be used for multiple tasks, and reconfigured and reprogrammed quite easily. Tecan has provided very good support whenever we have questions or encounter programming problems, and has been willing to adapt software and hardware to suit our needs. We’re really happy with improvements that Tecan has made to the software system, so much so, that we have just bought a third Fluent.”

For research use only. Not for use in clinical diagnostics.