Automating a herd of tests

The COVID-19 pandemic is an important reminder that pathogens are not only transmitted via air and contact with other humans, but also from animals and through food. This highlights the need for effective diagnostic tools that offer fast testing of animal and environmental samples to help monitor livestock and aquaculture. Qualyse is a French company that does exactly this, using advanced laboratory automation to provide immunoserology and molecular diagnostic testing for up to 12,000 samples a day.

Laboratory testing is an essential part of veterinary diagnostics, not just to help alleviate or cure diseases in domestic animals, but also for biosurveillance to prevent zoonotic diseases being transferred from farm animals to humans via the food chain. Qualyse is a leading provider of laboratory services in northern Aquitaine, France, offering food safety, animal health and environmental testing for everything from cattle and goats to oysters and other shellfish. Cédric Trouvé, Production and Quality Director at Qualyse, explained: “We have three main sites – in La Rochelle in Charente-Maritime, Champdeniers-Saint-Denis in Deux-Sèvres, and Tulle in Corrèze – and use a wide range of chemistry, microbiology and molecular biology techniques. Our animal health services in Champdeniers perform both ELISAs and molecular diagnostics, testing for a wide range of diseases and pathogens that can affect animal or human health.” 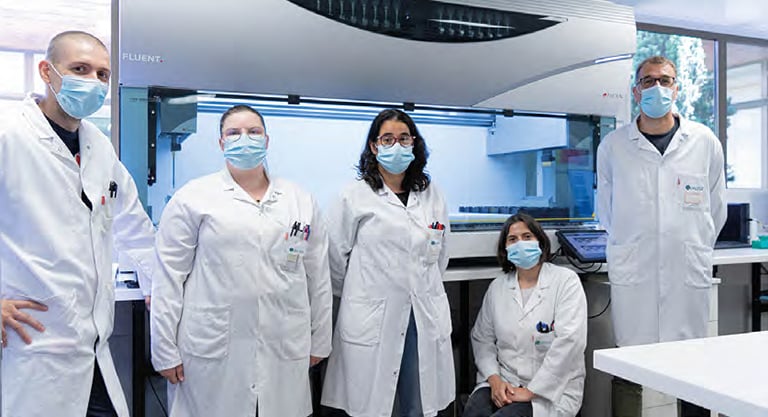 Mathieu Godillon, Technical Immunoserology Manager at Qualyse, commented: “In the immunoserology unit, we analyze more than 500,000 bovine samples a year for biosurveillance, which accounts for almost the entire cattle population across several departments. Deux- Sèvres also has a significant goat population for around four months of the year, and we are the only company involved in monitoring these herds, accounting for 50,000 samples a year. We also have a small unit responsible for monitoring transmissible spongiform encephalopathies, such as BSE in cows and scrapie in sheep and goats.”

Qualyse’s large workload would not be possible to manage without laboratory automation. Cédric continued: “We’ve had automated pre-analytical systems since 2002 but, when we gained the department of Corrèze – which has a huge cattle population – as a customer in 2018, we needed to scale up our testing capacity accordingly. It became clear that our facilities were undersized and outdated, so we began looking for a supplier to help us implement a high throughput workflow. We spoke to several suppliers during the tender process, and chose to partner with Tecan because the company’s solutions were the best match for our workflow and needs. We were particularly impressed by the Fluent® 1080 Automation Workstation, as its dual liquid handling arms would allow 12 plates – around 1,000 samples – to be processed in a single run.”

We are very happy with Tecan’s exceptional commitment, from the delivery and installation of the user-friendly instruments to the company’s continued support.

“The Fluent 1080 now performs a majority of our pre-analytical reformatting, transferring spun-down serum samples from tubes to two identical 96-well daughter plates – a ‘work plate’ for processing and a second for archiving – using washable fixed tips. The plates are then moved to either a Fluent 780 or a Fluent 480 – again using fixed tips – to generate intermediate plates on a disease-bydisease basis. For each serum sample, we may be testing for six or seven diseases – including brucellosis, paratuberculosis and gestational disorders. This can be performed by either testing individual samples, or by automatically pooling up to 10 samples per well to increase throughput and reduce costs. We also have a separate Fluent 780 using disposable tips for when the risk of cross-contamination is more critical, such as performing sample reformatting and pre-analytics for PCR testing, or screening before sales between breeders or export.”

“Once the intermediate plates have been generated, they are transferred to a different Tecan platform for testing,” Cédric explained. “For the immunoserology workflow, we have two Freedom EVOlyzer® platforms, which bring together all the modules – pipetting arms, washers and readers, etc. – required to fully automate ELISA testing. These instruments are extremely reliable, with a proven track record in human immunodiagnostics, making them the natural choice for our workflow. Each platform has a capacity of about 20 microplates a day, and we mainly use these to look for antibodies against various infectious or parasitic diseases, such as brucellosis, hypoderma and paratuberculosis.”

Cédric continued: “On the molecular diagnostics side, nucleic acid extraction is carried out in a BSL-3 lab, then we have a Freedom EVO® 100 which performs PCR set-up, dispensing both the extracted DNA or RNA and PCR master mixes ready for the thermal cycler. Since the start of the pandemic, we’ve also been working as a subcontractor to perform screening of SARS-CoV-2 variants – running almost 4,000 samples a day at peak times – alongside up to 2,000 samples from our regular workflow on the Freedom EVO.”

“Prior to the introduction of the Tecan platforms, our main challenge was always the pre-analytical workflow; this is now much faster and very reliable,” Mathieu commented. “The Tecan workstations allow us to run our workflow in 96-well plates and, more importantly, let us process a greater number of samples. Across all the Tecan systems, we have the capacity to process around 12,000 samples in a day, and generally run between 8,000 and 9,000 per day. This is particularly important during seasonal peaks – when our team works extended shifts of 10 hours – as without the level of automation our Tecan systems offer, this would be very difficult to achieve.”

“We are very happy with Tecan’s exceptional commitment, from the delivery and installation of the userfriendly instruments to the company’s continued support. Moving forward, we intend to move from 96- to 384-well plates with the help of the Tecan team, adding even more flexibility to our workflows. We would highly recommend Tecan to those in the animal health sector who may benefit from such capabilities,” concluded Cédric.

For Research Use Only. Not for use in diagnostic procedures.

To find out more about Tecan’s veterinary diagnostics solutions, go to www.tecan.com/veterinary
To learn more about Qualyse, visit www.qualyse.fr