3D cell culture is an area of great interest in the drug development industry, as 3D models give a more accurate representation of how cells act in response to compounds in vivo. Merck’s Cellular Pharmacology Department specializes in the use of spheroid cell cultures to test various conditions and compounds of interest, and identify candidate drugs. Automation plays a vital role in this process, enabling high throughput screening of cell-based assays.

Cell-based assays are integral to drug development, helping to speed up the time taken for pharmaceuticals to go from bench to market. Researchers in the Cellular Pharmacology Department – part of Discovery and Development Technologies at Merck’s facility in Darmstadt, Germany – are exploring novel cell-based assays for high throughput screening methods. Dr Sakshi Garg, head of the laboratory, explained: “High throughput screening platforms are essential for many drug discovery programs, in order to generate as much data as possible from the compounds of interest. We perform a variety of target- and phenotypic-based studies, using a combination of image-based and enzymatic assays to allow multivariate analysis and actually see what’s going on in the cells. Although we use both 2D and 3D cell models, our attention is increasingly focusing on the 3D format, as this provides a more physiologically-relevant representation of how cells behave in vivo. 3D models can also successfully mimic the complex microenvironment of a variety of tissues, assisting research into different disease areas.” 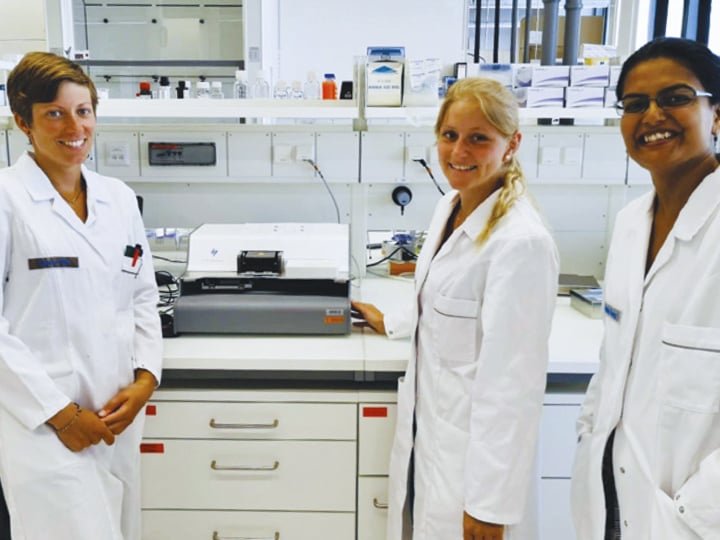 Jasmin Hunsrucker, a PhD student in the lab, continued: “To create 3D spheroids, we generally use coated 384-well plates with round-bottom wells to prevent the cells from sticking to the plastic. Once cell density has been optimized, we leave the cells to float in the media to form spheroids which, depending on the cell line, can take anywhere between one to three days. Once the spheroids are visible, we inspect them to make sure that they are intact and that they don’t easily disperse, then go ahead and treat them with candidate compounds; this is where Tecan comes in. We add compounds to the spheroids and then incubate the plates for two to four days before performing a viability assay to see the effects.”

Jasmin continued: “We’ve been using Tecan’s D300e Digital Dispenser since around late 2016, as a solution for automated and reliable low volume liquid handling. We aim to automate our processes where we can because, ultimately, when we go into high throughput screening, a manual workflow just isn’t viable. Automation of these set-ups provides our laboratory with a solution that not only saves time and increases productivity, but also improves the reproducibility and accuracy of our results. We first started using the D300e when we initiated our 3D cell work, as our acoustic dispenser required us to flip the plate when adding various compounds, which is not possible with spheroids, as they would fall out of the wells. We needed a contactless system capable of picoliter dispensing, and Tecan gave us this solution.” dispenser allows us to work with smaller liquid volumes without the risk of pipetting errors and, as we need to perform fewer dilutions, we use less starting material, which is great. We used to carry out all of the dilutions by hand, which was incredibly time consuming, so we were really happy when we started using the D300e, as we saved so much time. There’s a huge improvement in accuracy since we started direct dispensing into the plates, and it has improved the workflow of the lab significantly; we easily save about half a day per plate in time since adopting this automated approach. Previously, when pipetting manually, we would use 96-well plates, which limited the number of compounds or different conditions we could test. But now, as automated pipetting is so much quicker, we can perform more tests at once in 384-well plates. We can generate data much faster now, and that helps us to make decisions on whether or not to continue with certain compounds or projects – the process is much more streamlined and efficient.”

“Another huge benefit of the D300e is how intuitive it is; it was very easy and self-explanatory to set up, and the interface is extremely clear. Having this capability in a compact system on the benchtop really does simplify our workflow, increasing throughput and helping to advance our 3D cell research,” Sakshi concluded.

We easily save about half a day per plate in time since adopting this automated approach.

To find out more about Tecan’s D300e Digital Dispenser, visit www.tecan.com/d300e
To learn more about the Merck group, go to www.merckgroup.com/en