Harnessing the power of 'friendly' bacteria

The rising global problem of antimicrobial resistance has led to growing pressure on food producers to eliminate the use of prophylactic antibiotics as an additive in livestock feeds. To help combat the potential risk this poses to animal health, Agro BioSciences is harnessing the power of the microbiota present in the gut of chickens, pigs and cows to try and eliminate the growth of pathogens. 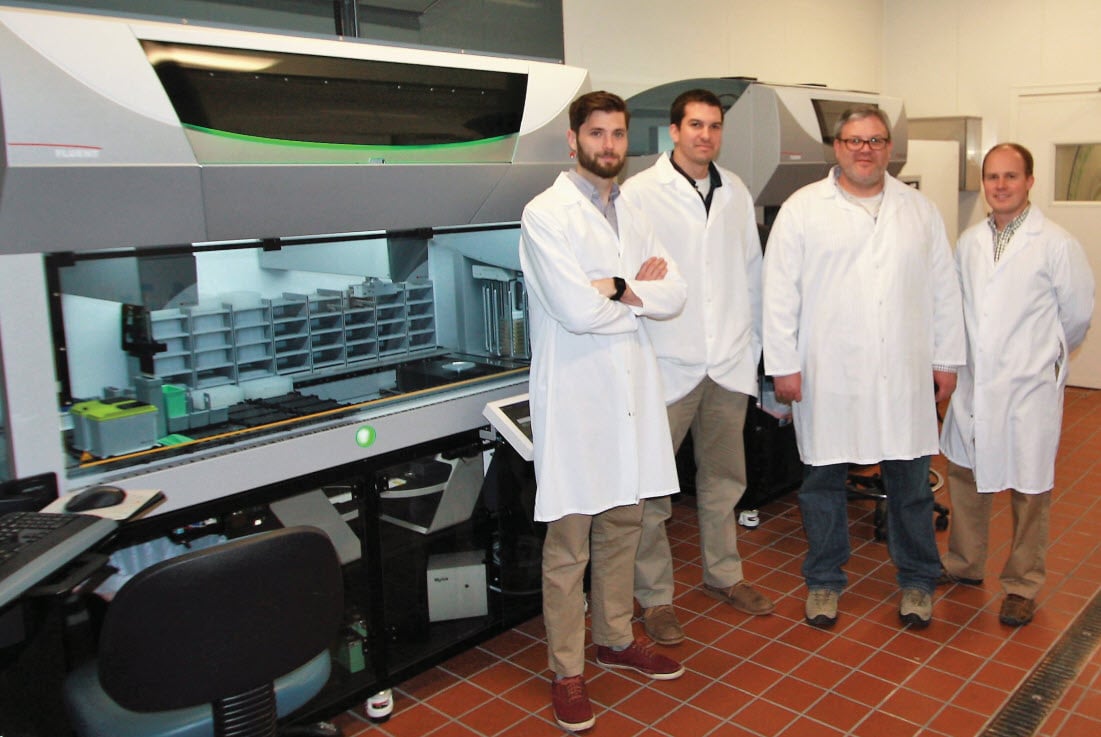 All multicellular organisms – plants and animals alike – are host to a variety of bacteria, fungi and other microbial organisms. This ‘microbiota’ is essential to their survival, and can have a significant effect on the health and taste of plants and animals destined for the food chain. Agro BioSciences – a subsidiary of Arm & Hammer Animal Nutrition – is harnessing the power of the microbiota to enhance the health and production of livestock. Josh Rehberger, Molecular Biologist at Agro BioSciences, explained: “The local environment around livestock can have a significant impact on the composition of livestock microbiota. This ‘Microbial Terroir™’ affects animals’ health in a variety of ways, including their growth rates and resistance to pathogens, and so we are adding probiotic bacteria to feedstuffs in order to enhance these beneficial aspects of the microbiota. The current push to eliminate the use of growth-promoting antibiotics in poultry production in the USA means that one area that we are particularly focusing on is the ability of the microbiota to help reduce pathogen loads in these animals.”

“One of the key features of our approach is that the nutritional supplements are specific to each Microbial Terroir, which means that we receive a lot of samples from farms across the country. These can be intestinal samples for poultry but, due to the economic value of the animals, are more commonly fecal swabs or rumen samples for cattle, and a mix of fecal and intestinal samples for pigs. On average, we receive around 100 samples a day for poultry, and 60 each for cows and pigs. Each sample then needs to be plated on a number of different media – usually around three per sample – ready for colony picking and downstream applications. This quickly adds up to somewhere in the region of 2,000 colonies a week that need isolating, so in 2016 we looked for an automated solution that would perform the plating, colony picking and some of the downstream sample preparation steps, allowing laboratory staff to perform other activities.”

“We looked at the various options on offer, and what really set Tecan apart was the ability to perform automated plating as part of a liquid handling workstation; nobody else seemed to be offering that capability at the time. We were initially interested in Freedom EVO® platforms, as the SciRobotics modules – the PetriPlater™ and Pickolo™ – were already integrated into this system but, as throughput was such a major consideration, we eventually chose the greater on-deck capacity and speed offered by the Fluent® Automation Workstation. The SciRobotics modules hadn’t yet been integrated into this system, but it was a very smooth process, as I think the SciRobotics team had already done a lot of the background work.”

"What really set Tecan apart was the ability to perform automated plating as part of a liquid handling workstation."

“We now have two Fluent workstations in the lab: one equipped with a PetriPlater spiral plater and a high capacity PetriSel™ carousel – as well as two KingFisher™ Presto Purification Systems (Thermo Fisher) – and the other with a Pickolo colony-picker. Both instruments are capable of performing fully automated plating, freeing up staff, then the plates are moved to an offline incubator to grow overnight. The plates are then loaded onto the platform equipped with the Pickolo for automated colony counting and picking. This system can count and transfer the colonies to 96-well plates far faster than we could achieve by hand, and it’s more accurate too, eliminating some of the ‘guesswork’ associated with the process. Plates are then split, with one portion archived in our offline freezers, and the system with the integrated KingFisher™ Prestos performs automated DNA isolation on the other.”

“A specialist from SciRobotics initially helped us to develop the picking profiles during installation, and we have since developed these further ourselves, resulting in huge time savings. The relationship between Tecan and SciRobotics is very beneficial from a customer’s perspective, ensuring that we can always get the answers to any queries we have,” Josh concluded.

To find out more on Tecan’s food sciences solutions, visit www.tecan.com/food
To learn more about Agro BioSciences, go to www.agro-biosciences.com