Dr Sam Abraham is an associate professor at Murdoch University, Australia, with a research interest in antimicrobial resistance and drug discovery. His presentation at Tecan’s virtual Genomics Symposium can be viewed here. 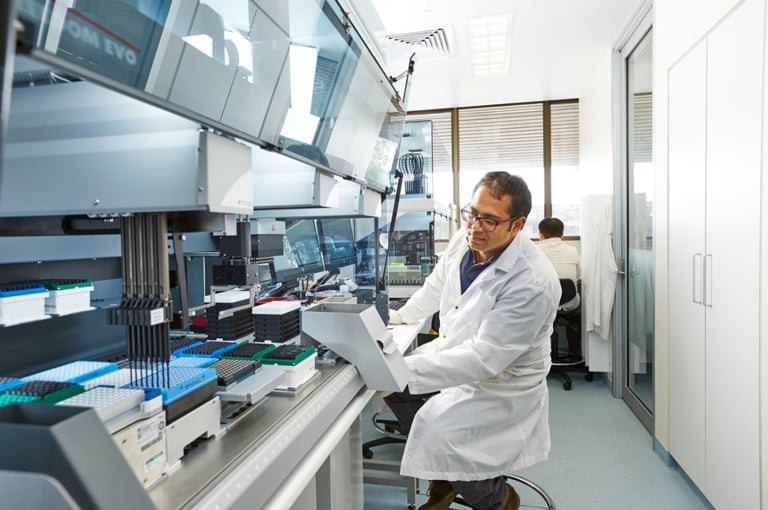 Globally, AMR is on the rise, and is a challenge arguably as pressing as climate change. It has emerged through inappropriate use of antibiotics, the use of antibiotics without prescription, and more importantly, a lack of new medications in the pipeline to treat bacterial infections. The issue isn’t isolated to human care, as many of the same or closely related antibiotics are also used to treat animals. This can result in drug-resistant pathogens evolving in animals, then being transferred to humans – and carrying the resistant genes – via the food chain. The increasing number of drug-resistant pathogens found in animals can lead to:

As a result, AMR acquired from food-producing animals is an imminent threat to human health, and must be detected before being transferred to humans, which is where AMR surveillance steps in.

AMR surveillance systems are used specifically to look for resistant pathogens that emerge in food-producing animals – providing a vital barrier to safeguard human health. Even though these systems continually operate on a global level, current practices are inadequate. The main issue is cost, as just one isolate costs around AU$300 from start to finish, equating to AU$60,000 per year for one bacterial species from one source. This leads to low sample sizes and, ultimately, limited conclusions.

Denmark, for example, has one of the best surveillance systems in the world in pig farms. But still, on average, only 193 colonies of E. coli are investigated each year. This is hardly an accurate representation, and certainly not enough data to guide critical AMR decision-making. Laboratory automation offers a potential solution to this problematic scenario, allowing large numbers of samples to be cost-effectively processed to deliver more tangible evidence to help preserve these life-saving medications.

RASP is an automated platform designed for high throughput AMR surveillance for various applications, including food-producing animals. It can provide rapid and robust data to advise veterinarians, farmers and government bodies on AMR in animal populations. Because AMR changes with time and location, this flexible platform is capable of capturing both existing and emerging resistance, and can potentially provide insights into evolving patterns.

Crucially, the platform can process and examine the huge quantities of samples required to provide robust data. Combining laboratory automation from Tecan®, MALDI-TOF from Bruker® and Illumina® sequencing into a single high throughput solution, it is possible to rapidly screen thousands of samples and study AMR in a large number of colonies, while adhering to internationally recognised standards.


1. A sample is taken from the field – in this case, from food-producing animals.

2. The sample is automatically prepared and spiral plated onto selective agars using technologies from SciRobotics® and Tecan to generate varying concentrations.

3. Automated colony picking – which can basically harvest the entire plate – is then used to isolate individual colonies into separate wells of a 96- or 384-well plate, where they can be frozen before subsequent testing.


The primary problem with traditional surveillance is that it picks just one random isolate that is not representative of AMR in that species. With RASP, the entire process is automated, making it possible to process thousands of isolates to generate robust, representative AMR data. In just two weeks, up to 4,000 isolates can be processed at a fraction of the cost of traditional methods – just AU$6 per isolate for MIC susceptibility testing.

This data can then be used to identify highly resistant strains, and the carriage of resistance within a species and between farms. The data can also be sorted into a national database, and more importantly, communicated back to farmers, veterinarians and policy makers to guide appropriate changes in treatment.

Combining automation and genomics to make an impact

Methicillin-resistant S. aureus (MRSA) causes significant health issues in humans and animals. In Australia, a highly virulent strain of MRSA was identified that jumped from humans to pigs, then subsequently re-infected humans. Using high throughput automation and genomics, it was possible to track the origin of this strain. It was found that various human MRSA strains colonised Australian pigs through farm workers from Australia, China and Europe.1 This information led to increased farmer education and procedural changes, where workers started wearing masks and using improved hand hygiene.

Another study discovered that some seagulls carry drug-resistant strains of bacteria from humans. Again, genomics and automation were used to conclude that seagulls were acquiring E. coli strains from humans that are highly resistant to last-line antimicrobials.2 In both these cases, this technology helped to provide a comprehensive understanding of how AMR in animals is linked to human health.

Combining automation and genomics is the future of microbiology. Upscaling using advanced liquid handling platforms allows us to rapidly evaluate AMR interventions, implement changes in bacterial management strategies, investigate outbreaks and screen pathogens in both humans and animals. RASP is a next generation approach in AMR surveillance that significantly increases throughput and reduces cost, leading to better decisions and policy making to reduce the global impact of AMR.

To find out more about Tecan and SciRobotics’ colony picking and plating solutions, visit www.tecan.com/colonypicking.

These products are only available for sale to laboratory professionals and may not be available in all countries. Please always read and follow the instructions for use and contact us for more information.