Understanding how and when laboratory automation assets are being used is crucial to maximize productivity and enable effective resource planning in high throughput facilities. California’s Ambry Genetics has a portfolio of almost 60 Fluent® and Freedom EVO® liquid handling platforms, and has worked closely with Tecan on the development of Introspect™, a cloud-based service that provides a comprehensive overview of precisely when and how laboratory automation systems are being used.

Ambry Genetics, a Konica Minolta company, is a leading provider of genetic clinical diagnostic services, including familial cancer screening and exome testing. In 2016, the company built a state-of-the-art ‘Superlab’ designed to increase the efficiency, precision and quality of its testing workflows, while reducing the risk of human error. This CLIA/CAP-certified facility was initially equipped with 30 Freedom EVO liquid handling platforms to perform a wide range of assays, and the lab’s automation portfolio has since grown to include almost the same number of Fluent Automation Workstations. Managing the lab’s huge testing workload of up to 3,000 samples a day, and ensuring that resources are used as effectively and efficiently as possible, is a major challenge, as Director of Assay Automation Joy Rae-Radecki Crandall explained: “The Superlab was designed to be as efficient and high throughput as possible, while still offering us the flexibility to run numerous different assays and chemistries on each workstation. Being able to see when and how effectively each system is being used is therefore key to ensuring we can maximize our throughput, and still have built-in redundancy to cope with peaks in sample numbers or instrument downtime for maintenance.” “This information is available as part of the log files for each instrument, but we had no way to centralize and visualize that data without a lot of manual processing. We initially looked at creating a software script to retrieve and compile the relevant data from each platform but, after discussing the issue with our local Tecan representative, we discovered that the Tecan software development team had been exploring the same idea. We decided to collaborate and act as the alpha user for this project, which later became Introspect.” 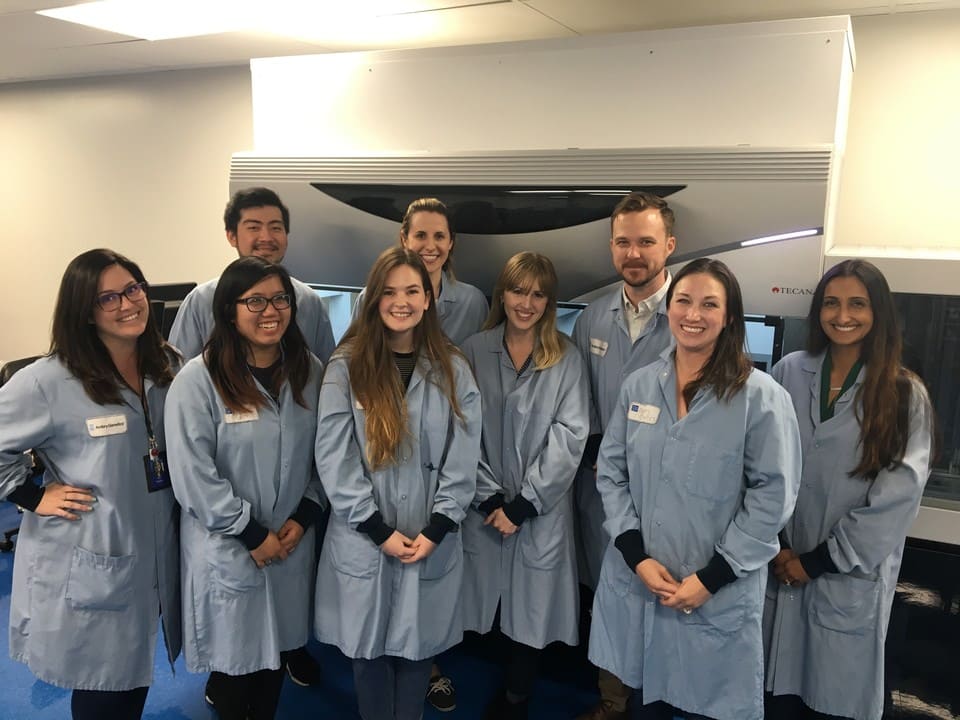 “Our primary requirement at the outset was to have a software tool that provided a visual representation of when we were using our various instruments,” Joy continued. “I’m a big advocate of color-coded graphical data, as it makes it much easier to understand and digest. And once we began looking at that data, we started to notice patterns and pick up on all sorts of things we hadn’t even considered before. For example, we noticed that certain assays or times of day had higher error rates, prompting us to investigate and address the cause – from providing additional staff or training on a certain workflow to identifying bugs in our scripts. Regardless of the reason, resolving these issues has led to fewer errors and re-preps – which are both costly and time consuming – and has simultaneously increased staff confidence. We hadn’t even considered this as a potential benefit when we began the software development with Tecan.” “Looking at the basic utilization data by instrument, Introspect obviously highlights which platforms are being used to capacity, and where we have redundancy. For example, if a system is being fully employed during the day, but not overnight, then there is potential for it to be used to perform a different assay in the evenings – as long as we have enough staff to run it. This level of visibility makes it very easy to build a business case for the purchase of new platforms, as we can clearly see how much instrument time and capacity is available relative to the number of tests we’re performing. It also makes it much easier to deal with fluctuations in sample numbers, allowing us to forecast how many consumables we are likely to need and ensure we have enough disposable tips and other labware in our inventory.”

Having easy access to your instrument data makes Introspect such a powerful lab management tool, allowing us to be proactive in our approach to resource utilization.

“Another interesting aspect, which we hadn’t considered, was the software’s ability to track the amount of time we spend on research and development activities to validate newly commissioned assays or platforms. This can have tax implications, so being able to easily show when the platforms have been used for non-profit generating activities without having to manually record hours is important. This is another example of how having easy access to your instrument data makes Introspect such a powerful lab management tool, allowing us to be proactive in our approach to resource utilization.”

To find out more about Tecan’s Introspect service, visit www.tecan.com/introspect
To learn more about Ambry Genetics, go to www.ambrygen.com