The initial screening of chromatographic conditions can be a major bottleneck in the development of protein purification protocols. Italian company BiCT – Biological and Chemical Technologies – has turned to automation to overcome this issue, implementing parallel processing of miniature chromatography columns on a liquid handling platform to enable rapid simultaneous screening of a range of conditions. This maximizes the prospect of achieving the best result for each project while saving time and resources.

Lodi-based BiCT began life nearly a decade ago as a contract research organization (CRO) focused on the pharmaceutical sector, establishing a core business developing biocatalysis and biotransformation protocols using enzymes and micro-organisms. Subsequently, the company expanded its field of interest, applying the same technologies to other sectors, including nutraceuticals, cosmetics and agrochemicals. More recently, it has turned its attention to production, and now operates as both a CRO and a manufacturing facility. Silvia Rapacioli, Co-CEO and Marketing Manager of BiCT, explained: “We provide services to customers from all around the world who appreciate our industrial focus. Our services include everything from initial research all the way through optimization to pilot-scale production and technology transfer to the customer’s own lab for use on an industrial scale, with minimal adjustments to the process.” Silvia continued: “One of our biggest assets is automation. We offer a broad range of automated high throughput screening protocols for molecular biology, fermentation, purification and biocatalysis, developing efficient, cost-effective processes. Automation allows us to design our experiments to test numerous variables, increasing throughput and enabling many different protocols to be evaluated to ensure we provide the best possible solution. The data is critically analyzed and forms the basis of innovations that progress to the pilot plant and, ultimately, become manufactured products.”

BiCT is set to move to larger premises in the near future that will include a dedicated automation unit. In preparation for total laboratory automation (TLA), the company is implementing, among other applications, parallel processing of miniature chromatography columns on a liquid handling workstation to increase the speed of development of new protein purification protocols. “The core role of the automation lab in the new facility will be strain improvement and chromatographic purification, from strain development to purification of enzymes, important metabolites and proteins of pharmaceutical value. Chromatography is a key step in our workflows, and we chose Tecan because, in our opinion, it is the best system available.”

As a prelude to establishing a dedicated automation hub, BiCT worked with Tecan to explore the use of the Te-Chrom™ and Te-Chrom Shuttle with Repligen OPUS® RoboColumns® on a Fluent® Automation Workstation for sample purification. “We initially evaluated the RoboColumn technology on a Freedom EVO® workstation, and have now implemented this application on the Fluent. The system is very intuitive with straightforward software, and allows us to automate parallel purification on miniature chromatography columns,” said Silvia.

"[Automation] gives us the opportunity to try as many options as the team can think of, exploring their creativity to its maximum potential, which increases success rates and the potential for devising innovative, ‘out of the box’ solutions."

Roberto Verga, Co-CEO and Business Development Manager, took up the story: “There are several things to consider when you are developing a purification protocol, such as the column volume, type of resin and screening conditions, which is a bottleneck when you can only run one column at a time. The big advantage of implementing the RoboColumns on the Fluent is that we can run eight columns in parallel – 96 in one run – simultaneously studying a lot of parameters, including the kind of resin, flow rate, binding capacity, sample clean-up and the best ratio of sample to resin. This allows us to speed up the all-important screening process and move on to the next stage – process scale-up – more quickly. The system is very reliable, and we can easily change our protocols to use the larger volume RoboColumns, which have proved representative of the subsequent industrial scale-up. We have also been able to engage with chromatographic media manufacturers by, for example, comparing different resins, developing specific resins suitable for customers’ applications, or evaluating the performance of new resins to generate data for technical brochures prior to the product launch.” 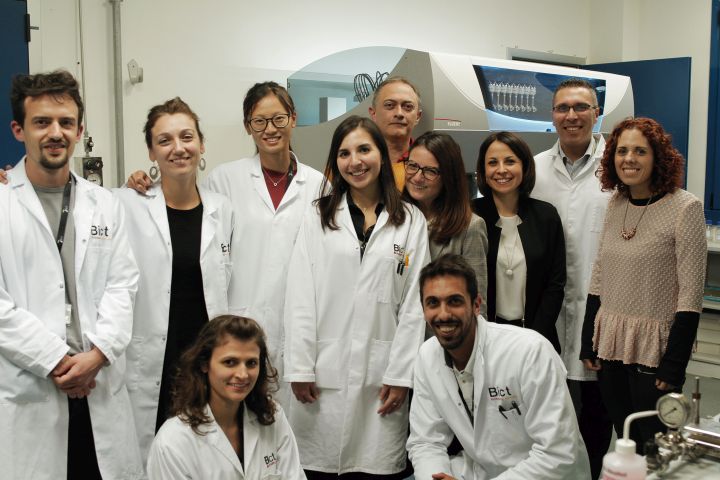 The BiCT team with the Fluent Automation Workstation

“The success of our company depends on the satisfaction of our customers,” Roberto continued. “With automation, we increase the chance of finding the right candidate biologic and the best purification protocol quickly and cost effectively. Previously, we could only evaluate one column at a time. This was a huge effort, consuming a great deal of time and resources, with the risk of missing the best results that can come from testing several conditions simultaneously. A purification protocol that used to take a month to set up can now be established in just one week, which is a huge saving in terms of both time and resources.”

“The potential to integrate the entire strain improvement workflow into our lab automation is very important. It is a real benefit not only for our customers, but also for our staff. It is like having an extra five or six collaborators that never get tired. It gives us the opportunity to try as many options as the team can think of, exploring their creativity to its maximum potential, which increases success rates and the potential for devising innovative, ‘outside of the box’ solutions for every project. TLA will undoubtedly be a key resource for contract research in the future,” Silvia concluded.