Recent viral outbreaks have alerted the world to the serious consequences of viral disease, yet the development of new antiviral drugs is challenging because of problems such as resistance or lack of molecular targets. Researchers at Zhejiang University’s College of Pharmaceutical Sciences are seeking to identify new antiviral drugs by combining insights from traditional Chinese medicine with modern high throughput technologies to discover novel lead compounds.

Infectious diseases have become one of the greatest global public health threats. The rise of antibiotic resistance, and search for new drug targets and candidates, has been well publicized for a number of years, but recent major outbreaks of highly contagious viral infections – such as Ebola, Zika and Dengue – have highlighted the need for more effective antiviral drugs. These viral infections accounted for over one million deaths worldwide annually in 2016, yet the development of new antiviral drugs has seen little progress due to a number of challenges. The lack of viral molecular targets impedes viral drug discovery, as does the high rate of genetic mutation in some viruses, which drives the development of new drug resistance mechanisms. These challenges have led Professor Yi Wang and his group at Zhejiang University to explore a novel source for new antiviral compounds – the ancient Zhongjing formulae. Written almost 2,000 years ago – sometime between 150 and 200 AD – this collection of more than 200 traditional Chinese remedies is well known throughout Asia, and is the origin of many modern Chinese medicines today. Professor Wang outlined how his group has gone about investigating this unconventional source: “In ancient times, people knew nothing of viruses or bacteria; they only knew that one of the Zhongjing formulae would be effective against certain symptoms. We therefore needed to develop an approach which was not dependent on understanding the molecular target, but rather the stimulation of the immune system. Our methodology is not focused on a specific virus or bacterium, but instead uses a cell-based luciferase reporter assay that determines the ability of the formulae to activate interferon-stimulated response elements (ISRE) – a key element of the antiviral interferon signaling pathway.”

Professor Wang and his group in the joint laboratory

Traditional Chinese medicine is considered a valuable resource for drug innovation, but blind screening models result in high rates of rediscovery, and low probabilities of hit compounds. To counteract this, Professor Wang and his group developed a knowledge-based high throughput screening platform which combines information already known about ancient healing practices with high throughput screening. He explained: “We identified the herbs that appear most frequently in the Zhongjing formulary, then focused on formulae that not only contain these herbs, but are also suggested for treating influenza-like symptoms as an indicator of possible antiviral activity. Aqueous extracts of the most promising formulae are prepared and fractionated to construct a library of 1,306 different fractions or components.” 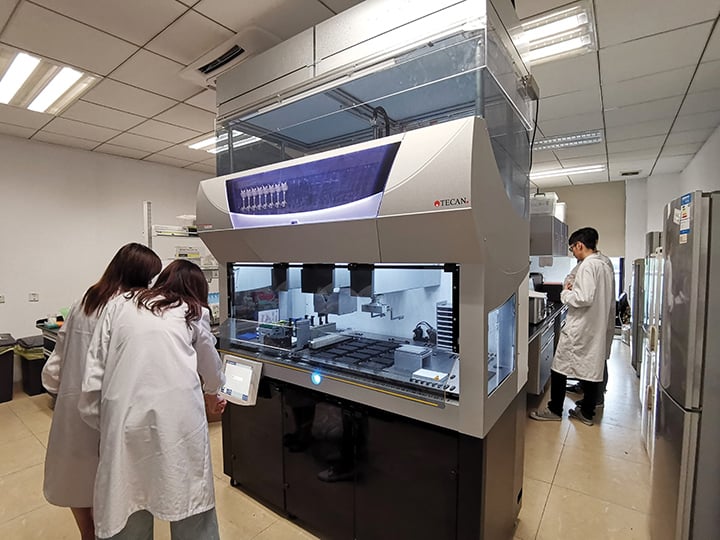 To examine the antiviral activity of the compounds, HEK293T cells transfected with pISRE luciferase are seeded into 96-well microplates and cultured for 24 hours. They are then treated with components – or IFN-β as a positive control – and incubated for a further 24 hours before measurement of the luciferase signal as an indicator of ISRE activity. “We are very lucky to have a joint laboratory with Tecan here at the university, and use a Fluent® 780 Automation Workstation to manage all the pipetting steps, including the initial dilution of the fractions. The system works very quickly, allowing us to test three biological replicates of each cell-based assay plate. Previously, we would have had to perform all the pipetting manually, but could handle no more than 300 compounds in a study. Automation allows you to easily investigate more than 1,000 compounds at a time, and the stability and reproducibility of the Fluent system results in very linear data, with small standard deviations.” The luciferase signal is detected with an Infinite M1000® PRO. Professor Wang continued: “This instrument is very sensitive, and we haven’t found any analyses we can’t handle. It can do everything – luminescence readouts, protein quantification, testing fluorescent probes – so it gets a lot of use by everyone in the lab. We have another reader downstairs but it’s not as nice to use as the Tecan.”

This screening study identified several hits – from the components of seven of the Zhongjing formulae – which were further characterized using LC-MS. 11 compounds were tentatively identified, five of which were unambiguously identified with chemical standards. The group then went on to confirm the antiviral function of each compound using ISRE activity.

“Using the Tecan equipment, we’ve been able to screen more than 1,000 components from traditional Chinese medicine and found not just one, but three novel compounds that led to a significant increase in ISRE activity that had not previously been reported in the literature. The results of the study have now been published in Pharmacological Research,1 and we are preparing two further manuscripts for submission in the coming months. We are very happy with our successful collaboration with Tecan, and look forward to working together more in the future,” Professor Wang concluded.

Automation allows you to easily investigate more than 1,000 compounds at a time, and the stability and reproducibility of the Fluent system results in very linear data.