A smooth path for novel biologics

Cell culture is at the heart of the production process for many biopharmaceuticals, but finding the optimal conditions to maximize yield can be a complex and time-consuming process. Traditional process development relies on costly and labor-intensive set-ups, significantly limiting throughput and the range of experimental conditions that can be assessed. Scientists in Roche Pharma Research and Early Development (pRED) have adopted an alternative approach, combining single-use microbioreactors with advanced automation and analytical platforms to streamline the workflow.

The production of large biological molecules for therapeutic use is complex, requiring expression of the target peptide, protein or antibody in suitable host systems, followed by extraction and purification to yield the final drug. Efficient expression requires not just the right host organism and clone, but also the right physical conditions and chemical environment to promote production. Exploring these numerous parameters to optimize biotherapeutic production is a very time-consuming process, requiring cell expansion followed by numerous fermentations in parallel to identify the best candidate and conditions for its expression. As such, the more data points that can be obtained for each variable, the greater the probability of establishing a highly productive final process. Fermentation development has historically relied on performing parallel experiments using a number of shake flasks or two-liter bioreactors, with continuous sampling to enable process monitoring and analytics. Unfortunately, this approach is both time consuming and labor intensive, with one researcher able to handle just a few bioreactors simultaneously.

When the Bioprocess Research Department at the Roche site in Penzberg, Germany, was challenged with significantly increasing the number of proteins it produced, the team realized they needed to look for an alternative solution. Pawel Linke, a lab automation specialist, explained: “We were asked by the management to look for a way to do even more process development for more complex biotherapeutic candidates, as well as double the number of projects we performed per year. This clearly wasn’t going to be possible with our existing workflow – a very hands-on process – without significantly increasing headcount, which wasn’t an option.”

“We looked at the various solutions on the market and chose the Ambr® high throughput, single-use microbioreactor system from Sartorius. We now have two different types of Ambr system: four Ambr 15s, which can run up to 48 parallel fermentations of up to 15 ml, and five Ambr 250s that allow us to run 12 larger scale, 250 ml fermentations simultaneously. This shift represented a huge increase in capacity, allowing us to run four or five times as many experiments with the same number of staff. However, it also created new challenges, as we significantly increased the number of samples to be analyzed. We therefore needed a way of efficiently processing up to 250 samples every day, before analyzing them on a Cedex Bio HT Analyzer from our sister division Roche Diagnostics.”

We now have two different sized Fluent systems with slightly different configurations, giving us more than enough capacity to process samples for every Ambr bioreactor every day.

“We have a huge number of laboratory automation systems here in Penzberg and, based on this experience, we decided that a Tecan liquid handling platform would be the best fit for our needs. A key requirement for our workflow was the ability to integrate a large centrifuge to spin down the samples before analysis, and the Fluent® Automation Workstation’s ability to mount a Hettich ROTANTA 460 robotic centrifuge below the worktable was a real benefit. We simply place the samples from the bioreactors on the workdeck, and the system is able to automatically load them into the centrifuge using its Robotic Gripper Arm™ (RGA). Once spun down, the Fluent platform splits the supernatant into several aliquots in different labware formats, depending on the downstream application.” 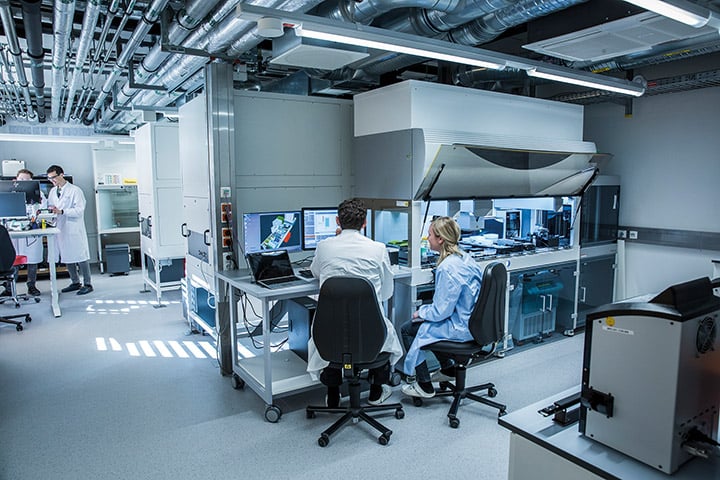 “We now have two different sized Fluent systems with slightly different configurations, giving us more than enough capacity to process samples for every Ambr bioreactor every day, although we do not have this many experiments running in parallel at present. The smaller system is equipped with an RGA for labware movements and an eight-channel Liquid Handling Arm™ (LiHa) for pipetting, while the larger system has a third arm equipped with a Multiple Channel Arm™, allowing entire 96-well microplates to be duplicated or transferred simultaneously. Each platform also has an integrated Tecan microplate reader on the workdeck for some onboard analytics. Although both have cooling modules, we have now developed a workflow based on sealed, pre-pierced plates that can be accessed by the LiHa. This avoids evaporation without the need for cooling, further simplifying the workflow.”

“When we first implemented this set-up, the Cedex Bio HT Analyzer required 15 samples to be loaded into a metal rack for processing, but we have since worked with our Roche Diagnostics Custom Biotech colleagues to develop a 96-well microplate-based sampling system, allowing us to more efficiently transfer large numbers of samples between devices. We have also implemented Sm@rtline Data Cockpit (SDC) middleware (AGU GmbH) to streamline the flow of data between the Ambr, Fluent and Cedex instruments. This solution is able to take the sample IDs from Ambr systems and provide that information to Tecan’s FluentControl™ software. The Fluent platform uses an integrated barcode scanner to confirm the identity of each sample, associates that ID with all the aliquots it generates for downstream analysis, and exports the information back to SDC. The middleware then provides the relevant information to the Cedex Bio HT Analyzer. This means that, although each platform is effectively a standalone instrument, the software environment is as automated as the physical process. It’s a very smooth workflow, and provides a feedback loop back to the bioreactor. We developed this approach because we have many different researchers in the lab, working on a number of different projects. The touchscreen user interface on the Fluent workstations makes it very easy for people to walk up and use the systems with only minimal training – we have around 30 regular users – with a couple of ‘key users’ to handle protocol development and maintenance tasks. All together, it’s a great fit for our needs.”