Liquid Level Detection: why your pump needs a sixth sense

Taste, touch, sight, hearing, smell…humans rely on five exquisitely powerful senses to negotiate even the most mundane tasks. Liquid handling robots don’t have that luxury; they are required to perform repetitive, high-precision tasks more accurately and reliably than humans could ever manage. Choosing pumps with inbuilt sensors for liquid level detection (LLD) gives your liquid handling pump the “sixth sense” it needs to avoid costly errors and ensure liquid transfer accuracy every time. Here’s what you need to know about LLD when choosing a pump for your automated liquid handling platform.

Will your liquid handling platform be able to accurately detect liquid levels even in the presence of foam? Selecting the right pumps and LLD solutions for your automated liquid handling project requires early planning and careful consideration.

Liquid level sensing technologies are an important design element for advanced liquid-handling instrumentation. Implementation of LLD should be considered as early as possible in the development cycle. That’s because once you’ve committed to a particular pump and LLD approach, it may be difficult to implement a different component without significant redesign of the system and/or software. That can translate into costly project delays, and delayed time to market. So what factors should you consider when selecting the right pump solution the first time around?

Why LLD is critical to prevent carry-over and cross-contamination

Carry-over of liquids during aspiration and dispense steps can have serious consequences for experimental assays, diagnostic tests, and many other liquid handling applications. This is of particular concern when working with limited samples and in highly regulated environments—for example, when automating pre-analytical sample processing for clinical testing. Inadvertent cross-contamination or other liquid handling errors when processing multiple patient samples can lead to false positive or negative results that could jeopardize patient health. Limited availability of patient samples can further compound the problem; sample size may not be large enough to run additional, critical tests.

Depending on the automation application and sample handling procedures, liquid levels may vary between sample containers and from well to well on a single microtiter plate. Therefore, automated liquid handling systems must be able to detect the liquid levels in order to ensure that the pipette tip is inserted into the liquid at the correct depth. Submerging tips into test samples deeper than necessary results in excessive wetting of the outside of the tip. This excess sample can be carried across to the work deck, over other samples, and drip in an uncontrolled and undetectable manner, resulting in contamination that could have been avoided.

This is where liquid level monitoring comes into play. LLD devices monitor the level of the liquid, and use sensor data to ensure that the probe stops at or near the surface of the liquid. This exacting approach lowers the risk of carry-over, minimizes the amount of cleaning and washing needed in subsequent steps, and reduces sample waste. If sensor data is accessible in real-time, adjustments to tip depth can be made on the fly.

Liquid levels can be monitored in many different ways, but two LLD methodologies are predominant for automated pumps and robots:

Pressure-based liquid level sensing methods are based on detecting a change of pressure within the tip indicating that the open end of the tip is contacting liquid. The sensor data is used to determine how far to insert the probe. For liquid handling applications where cross-contamination is a concern, pLLD is often the method of choice.

cLLD is often the preferred sensor technology for liquid handling robots. It is faster than pLLD and can be used with fixed (metal) or disposable tips, as well as tips that already contain sample. However, cLLD is not reliable for detection of non-ionic fluids.

Benefits and drawbacks of pLLD

Pressure-based liquid level sensing delivers a range of benefits and enables several additional features: you can monitor the pressure profile during aspiration to detect blockages like blood clots, detect empty wells, and perform self-diagnostics, which are useful when a component of the system is leaking. Compared to cLLD, pLLD tends to deliver better performance preventing false detection caused by bubbles and foam. It works with any fluid type, including non-ionic fluids.

However, pLLD has two main drawbacks:

“Tecan [as an OEM provider] offers a combination of performance, accuracy, cost and advanced features – including automatic tip detection and ejection, plus liquid level detection - that is very favorable to our application.”

The two technologies, pLLD and cLLD, can be used together. Incorporating both types of sensor on the same platform offers combined advantages that far outweigh the drawbacks of either technology on its own. For example, cLLD is faster acting, while pLLD has the advantage that the same sensor used to detect the surface of the liquid can also be used to capture the aspiration profile to detect problems like blockages and empty wells. By incorporating both types of detection method on the same platform, you can avoid the need to compromise on any of these features.

The net result of combining pLLD and cLLD is higher overall process security. A combination of methods can be particularly effective in cases where surfaces are not homogeneous, such as in the presence of foam.

“The air displacement pipetting capabilities of the [Tecan] ADP offer precise liquid transfers from 0.1 to 1 ml, and this is much easier than our previous set-up, which required bottles of water as a system liquid."

Choosing liquid pumps and on-board LLD methods early in the instrument design process can be critical for success and timely delivery of your automation project. With so many different parameters to consider, the task of selecting the right pump features for your application can be quite daunting. Engage with a Tecan specialist now to discuss your requirements and determine the right pump for your project. 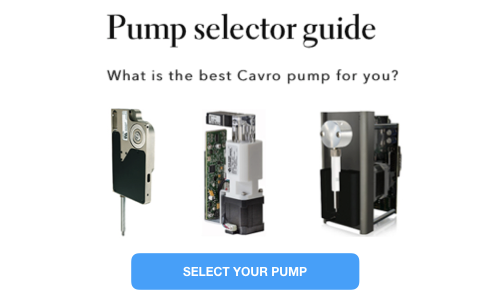 David Wold is the Customer Operations Manager for the Partnering Business in the Components Marketing Team. In this role, he oversees a team responsible for the support and satisfaction of Tecan’s top Components customers. Since 2005, David has helped Tecan customers meet their liquid handling challenges across a broad range of technologies and applications. He brings understanding and expertise to help customer choose components to meet their needs, provide maximum reliability and outstanding performance.